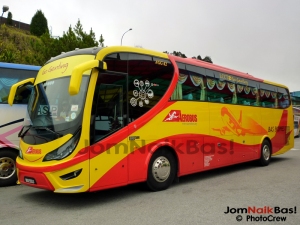 A name synonymous with shuttle services between KL Sentral and the Low Cost Carrier Terminal at KLIA (LCCT-KLIA), Aerobus, has launched a new service between the LCCT and Genting Highlands.

The service commenced operations on 1st September 2010 using a brand-new fleet of sksbus’ CP11-LW coaches which seats 41 passengers. Six departures from either points are served daily, virtually operating round-the-clock. Earliest departure leaves at 2 in the morning with the last departure of the day scheduled at 11pm. The journey from LCCT to Genting Highlands is expected to take approximately two and a half hours.

Passengers are able to book their tickets on this service online. One-way adult tickets goes for RM35 whereas return tickets are sold at RM70. Online ticketing are available at Aerobus’ website at http://www.aerobus.my/. For more information on the service, please contact Aerobus at:

One of the major bus service provider to and from the Low Cost Carrier Terminal (LCCT) at Kuala Lumpur International Airport (KLIA) will be launching a new route to 1 Utama Shopping Centre. Skybus will launch the new service on Thursday, 27th May 2010. 7 return trips will be provided daily, with the first bus leaving both points at 9am and the last bus departing at 9pm. A typical one-way journey is estimated to take up to 75 minutes. Tickets on the new service will be priced at RM15, considerably higher than the KL Sentral shuttle. All trips will be served on the new 40-seater Hino Rk1JSKA assembled by Master-Defence Technologies (MasDef).

Skybus is the first and largest operator of shuttle buses between LCCT and KL Sentral. With tickets selling for a low price of only RM9 per way per passenger, it operates up to 38 return trips with frequencies between 15 minutes and an hour. Click on the following links for the latest schedules:

is it possible we book our trip from LCC to First wrold hotel ?

There is no bus services from LCCT to First world Hotel

I will be reaching LCCT terminal at 9 pm and it would be almost 10-10.30 pm by the time I am out of the terminal. Is any coach/bus service is available for Genting at that time ? Taxi would be very expensive. We are family of 4 persons.

Sorry to say there is no available bus services to Genting at that time.. Your only option is to take cab to Genting , the charge between RM 80-120

is there any other way to go to genting permai resort from first world hotel besides cab?

You can take cable car from First world to Gotong Jaya station, then take a cab to Genting Permai Resort

Hi, I would like to check is there a straight bus service from first world hotel to lcct?

No, there is no service from First World to LCCT.

Yr alternative way. Is to take Genting Coach from First world to KL Sentral. From there hop into another coach to LCCT

I ‘d like to take the bus from Genting highland to LCCT (Airport), could you please kindly advise for the schedule and rate of the bus service. Thank you.

Welcome to GPR Photo Blog,
Anyone and everyone to know more about Genting Permai Resort.
All photos are copy right, only for personal use.